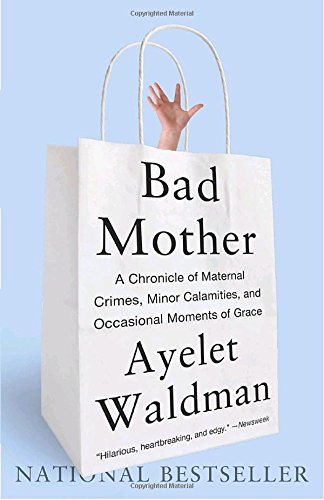 With this memoir-y collection of essays, published in 2009, Waldman beat Roxane Gay to the titular idea of ideological/institutional failure by five years. And Bad Mother and Bad Feminist do have a lot in common. Given that I’m imperfectly both mother and feminist, course I’m drawn to both titles.

A basic premise of the book: the Bad Mother is a common figure in our culture, from Medea to Britany Spears, but “there is something especially sharpened and hysterical about contemporary Bad Mother vitriol. The frequency with which a new Bad Mother is unmasked, and the extent of our interest in each one, are, I believe, more than merely symptoms of the contemporary general degeneration of civility” (8). Frustratingly, Waldman rejects the feminist conclusion to her very true observation: that patriarchy and a culture of misogyny are to blame for this increased vitriol. Instead, Waldman blames the widespread interest in Bad Mother figures on women’s desire for self-acceptance (if we can identify worse mothers than ourselves, we must be OK). Frankly, all she’s doing here is identifying one of the cruelest effects of patriarchy, the consequence of female misogyny, women hating on women because of their own lack of confidence, a misplaced internalization of self-loathing caused, in the first place, by the patriarchy.

It almost goes without saying that the opposite of the Bad Mother is the Good Mother who is characterized by self-abnegation. Waldman writes that being a Good Father is attainable, while Good Mother status is, by definition, impossibly to achieve without total self-immolation. Cue reference to The Feminine Mystique.

The essays address debate-inspiring topics like who does more housework (i.e., husband or wife? there’s apparently a handy questionnaire entitled “Who Does What?” that can help you confirm what you already know quite well, if you’re a wife, that you do way more work). There’s a short essay on the breastfeeding debate (because failure to breastfeed can be one of the most guilt-inducing maternal failures), one that sort of almost takes up the topic of the over-sexualization of girls (but Waldman’s no Peggy Orenstein, let’s get that clear). She also takes up the topics of Too Much Homework; Dodgeball Sucks, but some kids still like it (I hate it, my 6YO hates it, my spouse hates it, for the same reason Waldman hates it); the fact that every kid you have ends up with a different mom.

Waldman is not good on queer stuff: she defiantly repeats all kinds of annoying stereotypes of gay men and lesbians, and the book is definitely written for privileged people who live in places like Berkeley and Seattle. But there are highlights. For one, her maternal philosophy is that “mothers should tell the truth, even–no, especially–when the truth is difficult” (3). I concur. Still, Waldman is, in many ways, better on marriage than she is on mothering. This book emerged from an essay she published in the New York Times in which she admitted she loves her husband more than her four children. She articulates a surprising truth about marriage in an essay on the gendered division of labor in her household:

“as marriages progress, you surrender areas of your own competence, often without even knowing it. You do this in part because it’s more efficient for each individual to have his or her own area of expertise, but also as a kind of optimistic gesture. By surrendering certain skills, you are affirming your belief that the other person will remain there to care for you in that way.” (84)

One final thing: the strongest essay here, the one I’d want to share with friends, or teach in a composition course, is the one entitled “Rocketship,” about the pregnancy Waldman terminated for medical reasons after an unfortunately ambiguous amniocentesis pointing to the high risk of a certain very bad trisomy. She captures the anguish of pregnancy loss and the incredible departure of all naivete about subsequent pregnancies. I love the description of her support group–a bunch of bitter women trafficking in black humor and political consciousness who named themselves the Dead Baby Club, a club that “has more members than you would believe” (133). For a while during my fourth pregnancy, when people would stupidly ask if we were excited, I’d respond, “we just hope this one ends in a live birth and a healthy child; it could still go downhill.” Pregnancy loss engenders Enormously Bleak Killjoys.