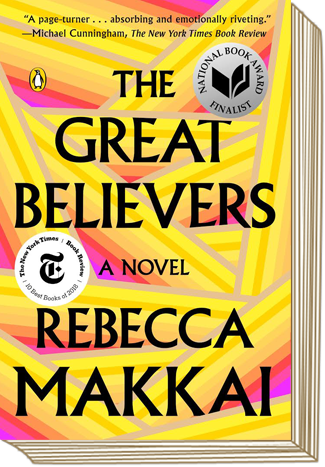 Ambitious novel set in two different time periods–1980s Chicago during the AIDS crisis and 2015 in Paris–with characters, timelines and plots that converged, but sometimes in confusing ways. The novel seemed uneven to me, overall: the parts of the plotting featuring Yale Tishman, his work at for an art gallery, dying friends, bumpy relationships, and AIDS activism were compelling. When this part of the novel ended, I wanted more stories about Yale and his community. And there were tear-jerking sections related to AIDS in the Yale plot. The other parts of plotting featuring Fiona searching for her angry adult daughter in Paris were just meh. I never quite believed in any of the rationales given for the daughter’s anger, her weird cold disdain for her mother. Fiona seemed like such an angelic character–ministering to the needy gay boys and men, when they were rejected by their birth families or when they got sick. How did she end up with such a jerk for a kid? And this cult she joined with another character’s creepy son? Not credibly drawn. I wish I could teach half the novel in my Intro to LGBTQ lit course. Still searching for the perfect AIDS crisis text to add to an undergrad classroom.