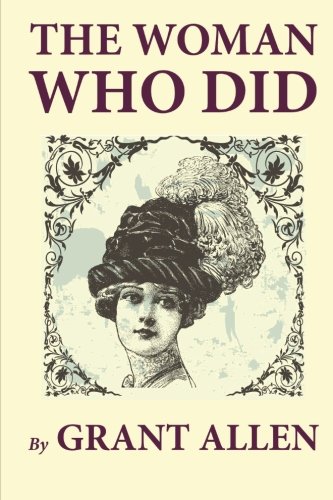 Probably the most depressing thing I’ve read all year. This 1895 novella by Grant Allen features a fiercely principled woman, Herminia Barton, who refuses to marry (before and after she gets pregnant) in a time when the unmarried woman and mother was socially excoriated. She has many speeches defending her ideals, as when she’s rejecting her first marriage proposal (from the man who later fathers her illegitimate daughter):

Think how easy it would be for me, dear friend, … to accept the HONORABLE MARRIAGE you offer me, as other women would call it; to be false to my sex, a traitor to my convictions; to sell my kind for a mess of pottage, a name and a home, or even for thirty pieces of silver, to be some rich man’s wife, as other women have sold it. But, Alan, I can’t. My conscience won’t let me. I know what marriage is, from what vile slavery it has sprung; on what unseen horrors for my sister women it is reared and buttressed; by what unholy sacrifices it is sustained, and made possible. I know it has a history, I know its past, I know its present, and I can’t embrace it. (ch. 3)

She goes on to call marriage a “system of slavery” and “an assertion of man’s supremacy over woman.” She throws Mary Shelley and George Eliot under the bus, more than once, claiming that they nearly lived out their ideals but gave way, in the end, to social conventions (once their desired marriage partner was available).

Herminia’s awareness of marriage as a historical institution comes, I imagine, directly from Grant Allen’s fanboy appreciation of Herbert Spencer, the father of the theory of social evolution (don’t @ me about his fatherhood status), who posited that the institution had evolved (in advanced societies) from promiscuity to plural marriage to monogamy (Principles of Sociology, 1885). The novel’s narrator, Allen’s mouthpiece?, later describes the primitive custom of marriage by capture, in a rant about the monopolizing instinct that renders England an atavistic nation. Having listed other monopolistic instincts, he then turns to

… the monopoly of the human heart, which is known as marriage. Based upon the primitive habit of felling the  woman with a blow, stunning her by repeated strokes of the club or spear, and dragging her off by the hair of her head as a slave to her captor’s hut or rock-shelter, this ugly and barbaric form of serfdom has come in our own time by some strange caprice to be regarded as of positively divine origin. (ch. 17)

The critique of marriage in the book was echoed in Allen’s time by other New Women writers and even writers that scholars don’t think of as New Women (Marie Corelli, for instance). So it’s not new, exactly, just a condensed and really compelling version of the debate over marriage–dramatized by Herminia’s own tragic story. Because of course her life choices don’t end well.

While fascinating to read, this book doesn’t count as pleasure-reading, since I read it for an article I’m working on about one of Allen’s other stories. I’m glad I read it, though, and probably will try to work it into a Victorian literature course at some point.