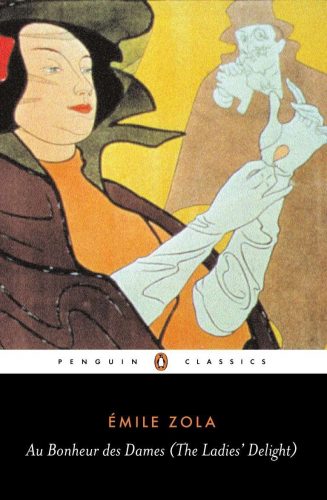 While I enjoyed this novel, in part for its detailed descriptions (Zola’s realism is exquisite), it also felt like it took me forever to read it. For a while I would tell people “I have been reading this novel longer than my baby’s been alive.” She’s six months old today. Welp, I finished it, dear reader. It’s a bit heavy-handed with its constant comparisons of department store capitalism to a hungry beast devouring human bodies (I mean alienated labor). It kind of reminded me of the way Dickens animates the factories in Hard Times, actually. My favorite part of the novel was the almost loving description of lingerie during a white sale (at the tail end of the novel, its derriere if you will) which I’ll quote at length because of its perfection.

All the feminine linen, the white underclothes that are hidden, was displayed in a series of rooms, divided between different departments. Corsets and bustles were on one counter, with stitched corsets, long-waisted corsets, boned corsets and above all corsets in white silk, with fans of colour, which had been the subject that day of a special display–an army of headless, legless dummies, with only their torsos and their flattened dolls’ busts under the silk, with the disturbing lewdness of cripples; and near them on other stands, bustles of horsehair and dimity rounding off these rods with huge, taut buttocks which looked from the side quite ridiculously indecent. But after that came the attractive intimate wear, pieces of it scattered over the huge rooms as though a group of pretty girls had been undressing themselves from one department to the next down to the naked satin of their skins. Here were the items of fine lingerie, white sleeves and cravats, fichus and white collars, an infinite variety of light, frilly things, white foam emerging from its boxes and piling up like snowdrifts. Here were camisoles, little bodices, morning dresses, dressing gowns, linen, nansouk, lace, long white clothes, free and thin, in which one could feel the stretching and yawning of idle mornings after amorous evenings. Then the underclothes appeared, arriving one by one: white petticoats of every length, the petticoat tight around the knees and the petticoat that drags its train along the floor, a rising sea of petticoats, in which one’s legs were lost; bloomers in cambric, linen and pique, wide white bloomers in which a man’s hips would have room to dance; and finally the underblouses, buttoned up to the neck for the night, revealing the bust by the day, held only by narrow straps and made of simple calico, or Irish linen, or cambric, the last white veil slipping from the breasts across the hips. In trousseaux, it became an intimate unwrapping, woman laid open to view from underneath, from the petty bourgeoise with her uniform linen to the rich lady smothered in lace–a bedroom open to the public gaze, where the hidden luxury, the pleats, the embroidery and the lace, became a sort of sensual depravity, the more it poured out in its expensive fantasies. Then, woman was dressed again, the white wave of this cascade of linen slipped behind the quivering mystery of skirts, the chemise stiffened by the dressmaker’s fingers, the cold bloomers keeping the folds from their box, all this dead percale and dead muslin, scattered across the counters, thrown aside, and piled up, was about to come alive with the life of the flesh, warm and redolent with the smell of love, a white cloud sanctified, bathed in night, the slightest flutter of which, to reveal the pink glimpse of a knee in the depths of this whiteness, would devastate the world.