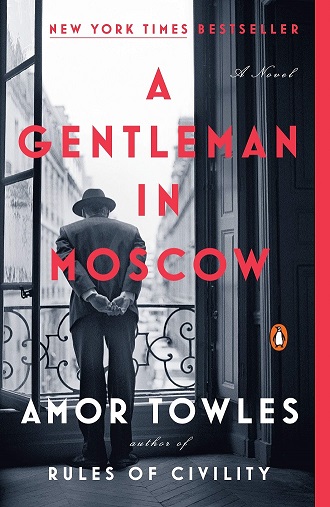 Initially, I thought: how could a book about a man confined to a hotel for life have enough plot or character development for 450 pages? Yet this turned out to be one of the best books I’ve read in a very long time. Amor Towles is a wordsmith, for one thing. He couches morals in lyrical language:

After all, what can a first impression tell us about someone we’ve just met for a minute in the lobby of a hotel? For that matter, what can a first impression tell us about anyone? Why, no more than a chord can tell us about Beethoven, or a brushstroke about Botticelli. By their very nature, human beings are so capricious, so complex, so delightfully contradictory, that they deserve not only our consideration, but our reconsideration–and our unwavering determination to withhold our opinions until we have engaged with them in every possible setting at every possible hour (120-121).

He has a sense of humor: every chapter title is comprised of a word or words that all begin with A. “An Ambassador” “An Anglican Ashore” “An Appointment” “An Acquaintanceship” “Anyway…” “Around and About” “An Assembly” “Archeologies” “Advent” –and that’s just the first Book of the book.

He includes footnotes, at once indicating and satirizing research. The novel offers a version of twentieth-century Soviet Russian history that is compelling and probably reasonably true. At one point the protagonist, a gentleman of the nobility, muses over his lifetime punishment (house arrest in the Metropole Hotel) for writing an anti-Revolutionary poem: “As long as there have been men on earth, reflected the Count, there have been men in exile. … Yes exile was as old as mankind. But the Russians were the first people to master the notion of sending a man into exile at home” (164). [If this subject is of interest, may I recommend the film The Cold Summer of 1953?]

He writes excellent plot episodes and twists and incidents that will stay with the reader. At one point, a comrade’s complaint results in the decision that all bottles in the hotel’s deep wine cellar must be divested of identifying traits (labels, prices) because the wine list “runs counter to the ideals of the Revolution. … it is a monument to the privilege of the nobility, the effeteness of the intelligentsia, and the predatory pricing of speculators” (142).

When I was nearly finished reading this book, I put it down for a month, just to prolong my pleasure. I finally completed it last week, and I was sad to say goodbye to the characters.